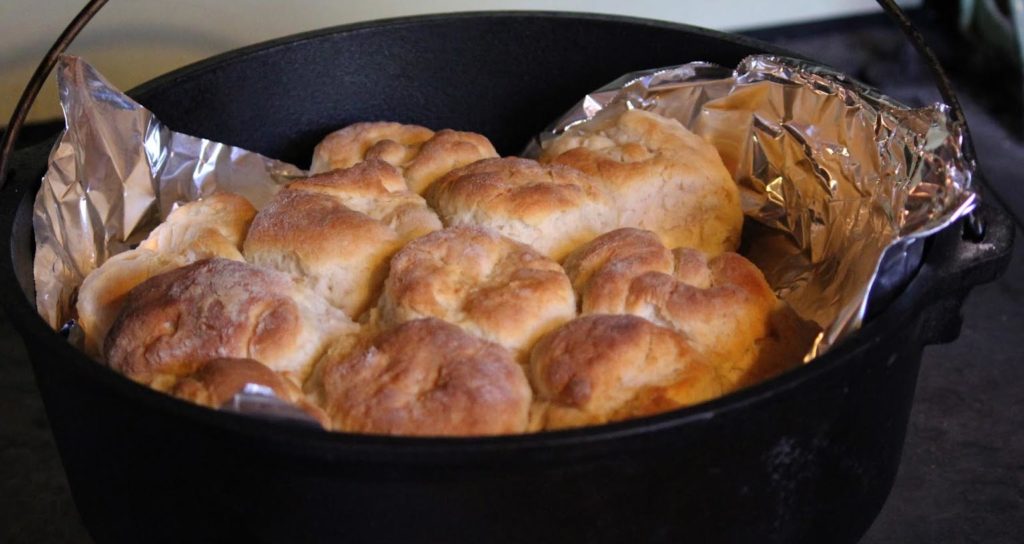 Submitted by Rick Beach. Homemade All-Purpose Biscuit Mix. Make your own Bisquick or All-purpose mix. For use in any Dutch Oven Recipe calling for Bisquick or other similar commercially available product. Better because you make it homemade. You know what ingredients are in the mix. You can alter the Shortening to use Crisco or Butter, or a combination of the two based on your preference. Mix up a dry batch at home. Store for several days in zip lock bags. Great to prepare at home for camping trips. Just add cold water, or cold milk for richer biscuits. To prepare to bake. Add small amounts of liquid until you reach your desired consistency. Never over mix any type of biscuit dough. All-Purpose Biscuit Mix (Better than Store bought)
Servings: 8 Biscuits 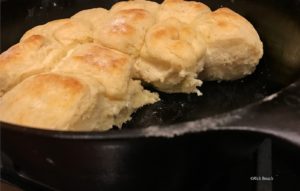 Here is a way to produce your own wholesome Buttermilk full of beneficial probiotics.   Put your vintage Slaw Cutter to good use.

BBQ Pulled Pork Sandwich. This is a southern style sweet BBQ that is not spicy hot. Recipe & Images by Rick Beach. Award winning recipe by Rick Beach. Took First Place "Main Dish" in the "Old Mormon Fort Dutch Oven Cook-off Competition", held in Las Vegas, Nevada (March 2017). If you have the means to smoke this. I often prepare and cook it as shown. Then using a smoker on about 250°F. Smoke the Meat mixture uncovered. I lay on smoke for an additional 2 hours. Stir once about mid way. Watch your moisture content so you don't dry it out. The taste will be incredible.
Prep Time15 mins
Cook Time3 hrs
Total Time3 hrs 15 mins
Servings: 24 Sandwiches 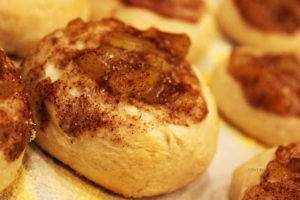 This is a basic Bagel Dough recipe. You can experiment with whole wheat flour, Agave in place of sugar, and a variety of toppings and ingredients such as cheese, seeds, raisins, cranberries, etc. 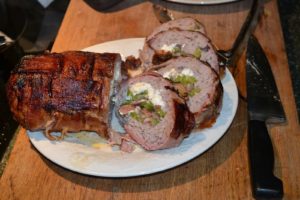 Recipe and Photo’s submitted by: Bruce Tracy Editor Note: From time to time we get recipes that even the name gets everyone's curiosity going. We believe this is going to be one of them! This dish looks hard to do but it is really very easy. Just get all of the ingredients on the counter before you start. Then all you have to do is reach and add. Many versions of this recipe use seasoned sausage. I don’t think that is necessary.
Prep Time15 mins
Cook Time1 hr 30 mins
Total Time2 hrs
Servings: 8 Servings

Bruce Tracy December 2013 Follow Bruce on Facebook at https://www.facebook.com/bruce.tracy.5 Interested in Bruce's hardcover Dutch Oven Cookbook? Just in time for Christmas?   One of many sources to purchase "Dutch Oven Baking" by Bruce Tracy 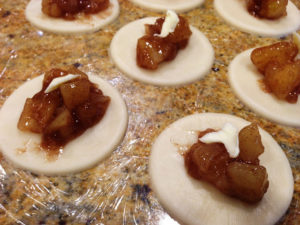 Turnovers can be glazed with cream cheese icing, brushed with a powdered sugar type glaze, or sprinkled with powdered sugar. This makes a bunch!

Do you know what a STAKE ANVIL is?

If you have more info on this tool, its specific use, era, or the Bridge Beach Co Foundry please check out the this link to our STAKE ANVIL Page and leave comments or email us your information. Thank You!

We just updated a new addition to our Cast Iron collecting. A 1920’s era unmarked Wagner deep skillet. Check out our Wagner file.