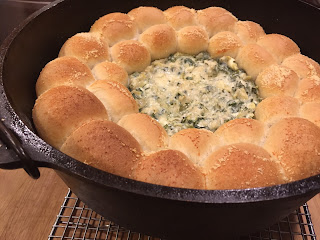 By combining two of our favorite recipes you can bake this fabulous Dutch Oven treat.  This creation is great as an appetizer.

Use a 14 inch Dutch Oven that has been well greased.  Grease up a relatively straight sided bowl to be placed right side up in the center of the Dutch Oven.  Size it properly to get 2 rows of finished rolls.  The dip will fill this space created by the bowl once removed.

Preheat oven to 375°F  if using the kitchen oven.

The rolls are from our OldFashioned White Bread recipe.  Use 1 Tbsp Agave or 1 ½ Tbsp white sugar in the recipe where it calls for Agave.  Follow the recipe through the first rise of the dough.  Turn out on a floured board and divide into 24 – 28 equal chunks of dough.  Tuck each piece of dough into itself to form a roll.   Arrange two rows of buns between the bowl and the side of the Dutch Oven.  Spray the tops with cooking spray such as Pam, or brush with melted butter.

Cover the Dutch Oven with Plastic wrap and set in a warm draft free area (top of the pre-warming stove) to allow the dough (now rolls) raise the second time.  This can take anywhere from a 1/2hr to 1hr.  Allow the dough to double in size.

In the meantime prepare the ArtichokeSpinach Dip up to the point of baking.  But do not bake it.  Refrigerate the dip while waiting for the buns to rise.

If baking with charcoal start your coals 15 minutes prior to the following steps.

Once the buns have risen, heat the dip until warm using a sauce pan or microwave.  Just to the warm point.  Do not cook it.

In a standard kitchen Oven bake uncovered at 375°F for about 40 minutes or until the rolls become golden brown.

Baking with charcoal, bake covered; applying more heat to the 14 inch Dutch Oven lid, and less underneath to get 375°F (Generally 19 coals on the top lid.  11 coals underneath the Dutch Oven.  Arranged coals just inside the outer perimeter –  If using a different sized Dutch Oven adjust accordingly)  Bake around 40 minutes or until the rolls are golden brown.

Per the Artichoke Spinach Dip recipe remove from the heat and garnish with Mozzarella Cheese and Fresh Ground Pepper.