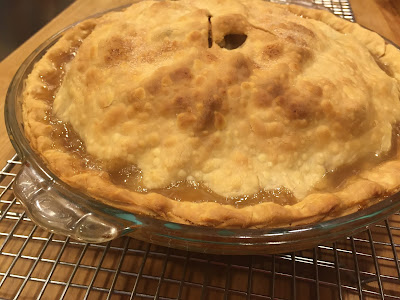 Add a few shakes of salt on top of the apple mixture now in the bottom pie shell.

Top with the other crust. Cut steam slits in the top crust and sprinkle the top with some additional sugar.

Bake at 450°F for 15 minutes. Remove the foil that is tented over the crust edge.

Reduce heat/coals to 350°F and bake for 35-45 minutes, until apples are tender and juices are bubbling out of the steam slits.

I always tent my outer perimeter exposed pie crust with foil for the first 15 minutes of any recipe.  This avoids premature crust browning. Use the normal recipe for a conventional oven and adjust your charcoal coals to equal the heat settings.

A long piece of foil (double it if using cheap thin stuff) is draped in the Dutch Oven prior to the pie being placed in.  The ends of this foil can be rolled up or left hanging out under the DO lid.  This foil is used for lifting the pie out after baking.  This foil lifter is especially useful when the pie plate/tin and the Dutch Oven sides are a tight fit.

Melt the butter and preheat the DO over the chimney starter while the briquettes are heating.

Mix the Milk, Sugar, and Flour together and dump on top of the melted butter.

Dump the pie filling in on the crust mixture and spread evenly across the top.

Then remove the bottom coals and place on top with the existing coals already there.  Check often until the crust browns. 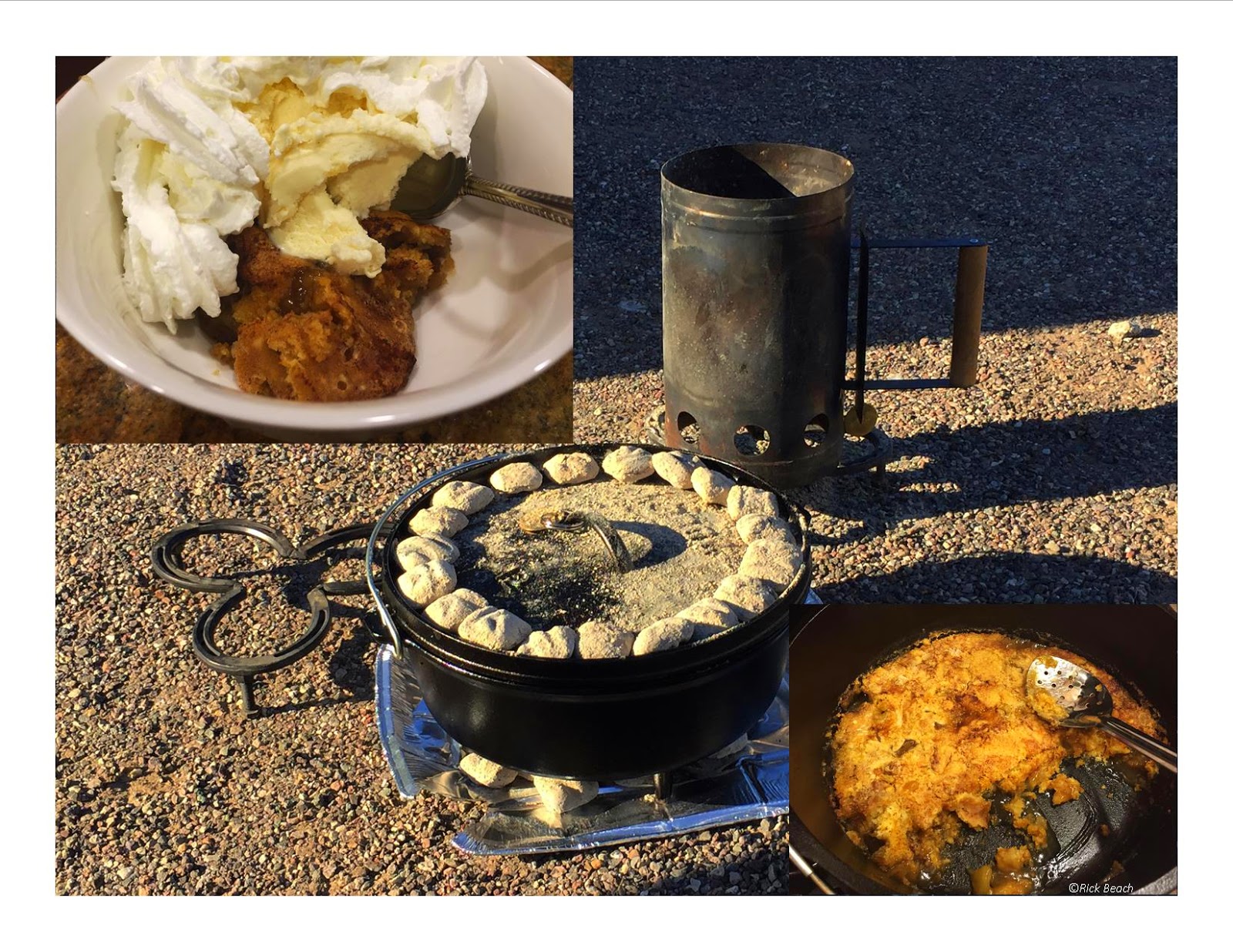 From our “First Annual Vintage Trailer Rally” @Lake Havasu State Park, Arizona. We managed to fire up the Dutch Ovens for the Potluck meal. Here is the Dutch Oven Apple Dump Cake Recipe:

8 oz Martinelli’s Sparkling Cider (Or Clear soda such as 7Up, Sprite, etc)

Melt 2 Tbsps. of the stick of butter in the bottom of the Dutch Oven. Pour in the chopped apple pie filling and add half the Cinnamon, Half the Brown sugar and shake of salt.

Dump the dry cake mix on top of the apple mixture and spread evenly.

Chop the remaining butter in chunks and distribute over the dry cake mix.

Pour the Cider over the entire top of the cake mix best you can.

Sprinkle the remaining Cinnamon and brown sugar over the top.

Cover the Dutch Oven with its lid.  Coals for 350 degrees heat.

With a 12 inch Dutch Oven, place 9 coals on the bottom at the outer perimeter. Add a full ring of coals to the top at the very perimeter of the lid (about 15 -18 coals.

The cake should be somewhat firm on the top, but gooey when served. Best served hot with some vanilla ice cream and a little whipped cream.

If you like a sweet sour combination, serve with creamed cheese. Once it is cold I love it with a sharp cheddar cheese.