The New Year started out with a bang from those irritating spammers and scammers.  The modern day version of a thieving con man.  To be PC and non biased, better stated, a (Con Person). Screen copies are both from today 1/3/2017.  It would be hilarious if a million people called them collect and they were stupid enough to accept. 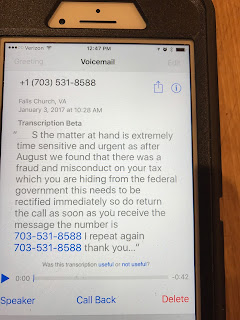 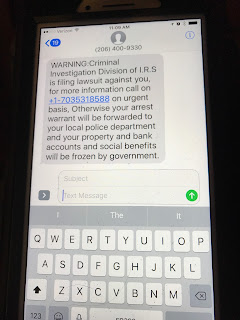 I have seen these go from simply worded, with bad spelling, and huge grammatical errors.  To these that are increasingly threatening in nature. These are the people our government should be protecting us from.  Seems like some simple changes to Service Providers systems would dry this up.

On January 3rd I first received a voice message.  A call that I did not answer.  Shortly after a text message that came.  From different numbers.  But both with a similar message and both had the same call back number.

I used to delete these.  Then I realized that is how this scam perpetuates.  No one takes the time or effort to even report it.  I have read numerous people fall for the scam.  This IRS scam is making scammers millions on a monthly basis.  Unfortunately many of the older generation, and the unsuspecting, are falling for the con.  As the con becomes more sophisticated I would imagine a greater chunk of the population is going to get fleeced.

This might be your elderly Grandmother, or young suspecting kids just starting out their adult lives.  Once these con men/people get your financial information or payment you can kiss it goodbye.  Chances of them getting caught is pretty remote.  They change phone numbers and use technology that provides bogus trails that help prevent anything leading back to them.  Or they are untouchable in another country.

Join the fight, to fight back.  Get on the Do Not Call Registry even though that is basically useless.  Then start filing complains each and every time someone attempts to victimize you.  Complain to all entities involved.  The Government, Your Phone Carrier, Your Internet Provider, the Entity the scammer is using for their front (i.e. the IRS), US Postal Service, and the FBI.  Some notifications and complaints are based on the source of your contact.  Was it a Text Message, Telephone Call, Email, something mailed to you?

Perhaps if the Government and Service Providers have to throw more money and labor at this, which takes money out of their coffers.  They might wake up take a more active approach to stopping this.  It seems simple enough if all Service Providers had a Reporting system that allowed victims or potential victims to report the numbers scamming them, then those numbers immediately put out of service by the Service Providers.  Without pressure or legislation things will probably not change.

What you can do to fight back under the current rules of engagement are:  The first thing recommended is to not answer unidentified callers.  First of all you don’t have to deal with talking to one of these crooks.  Con men of the current day are just as slick as those of yesteryear.  Secondly most phones record information you might wish to report.  iPhones and probably others now convert voice messages to written text.

Once you get one of these contacts it is highly recommended you don’t call them back and talk to them, or open up any Links within the text.  After reporting the crooks to the appropriate entities, block the number.  Then delete the messages.  Make complaints.  Provide the number that called you, the contact info you are suppose to call back to, or Email back to, and screen copies of the text info you received.

I can provide info for blocking on an iPhone running iOS 10.2

TO BLOCK A TELEPHONE NUMBER you were CALLED from:

2.  Tap the (circle i) off to the right of the number you wish to block

3.  Scroll to the bottom of the info displayed for that number

TO BLOCK A TELEPHONE NUMBER you were TEXTED from:

This used to work pretty much the same on previous iOS versions but has now changed.

1.  Go to the text/message you received

2.  Tap the (circle i icon) off to the right of the number you wish to block

3.  Initiate a Call to the senders phone number from that sceen and immediately cancel the call

before the call goes through.

This will put that telephone number in the “Recents” Call list.

5.  Tap the (circle i icon) of to the right of the number you wish to block

6.  Scroll to the bottom of the info displayed for that number

The old way of blocking a SMS Text message sender no long works where you used to be able to tap (Circle i) and select BLOCK.  Now the only option available from that screen is “DO NOT DISTURB”.  Using DND is not the same.  It does not block, only does not produce an audible notification of a text message.  The message still comes through.  So use the process listed above to Block Text numbers.

IRS Complaint for Phishing  If the link doesn’t work Email your complain to phishing@irs.gov

Most Credit Card companies and Web Browsers use the same format:

Cell Carries have a complaint link found on-line in your account for reporting such complaints.